Barn fire burns four-year-old mule. Over 60% of his body had second and third degree burns.

Written by American Fondouk on January 24, 2020

I know … the photos are brutal to look at. Even the most seasoned of our staff were heartbroken and horrified when we first saw “Buddy.”

He didn’t actually have a name when he was brought in to American Fondouk. But we found ourselves telling him over and over, “It’ll be okay, Buddy. It’ll be okay.”

So, we gave him a name and the best care we possibly could. And yes, it’s hard to believe, based on the condition he arrived in, Buddy made it!

While his is one of the worst burn cases we’ve ever seen at American Fondouk, you already know we see severely injured and ill animals on a daily basis. Their owners are simply so dependent on these animals to survive, that even a day without them threatens their ability to put food on the table and keep a roof over their family’s heads.

When one day without your animal can do that, it makes it a little easier to understand why animals aren’t brought to us until they are in very, very bad shape.

The best part is, that with every equine we treat, we’re also able to work with their owners. With education and understanding they’re learning to eliminate old, harmful animal practices that have been passed down for generations. Instead, we’re seeing improvements in how animals are shoed, the kind of materials used for bits and halters, and that not overworking animals is better in the long run for everyone. 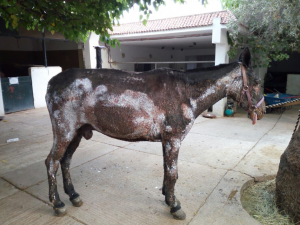 Four-year-old Buddy’s extensive thermal burns happened in a stable fire. The large area of severely damaged skin included his face, eyes, back, and legs. Just as with humans, the extent of burn wounds for animals are described by extent (percentage of body surface) and the depth of tissue damage (first, second, or third degree). Buddy had second and third degree burns on more than 60% of his body.

As you may have guessed, treating this kind of extensive injury was very costly. After his initial examination, we started Buddy on antibiotics and other medications, and put in an IV catheter because he was severely dehydrated. His wounds still needed daily washing, fresh dressings, and additional topical antibiotics to prevent infection and promote healing.

I’ve often mentioned that we can provide veterinary care here for a fraction of what those expenses would be in the United States. But, in Buddy’s case, treatment was very expensive and not something we could’ve planned in the budget. 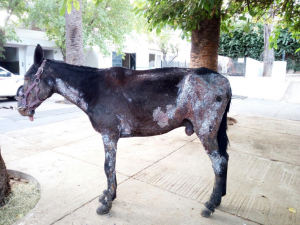 Buddy needed our help, along with all the other horses, mules, and donkeys who filled our stables that evening (and every night). We also had to care for the lineup of animals at the gates the following morning (and every morning).

Also, outside those gates are the people who depend on their animals and genuinely care about their well-being. Buddy’s owner borrowed a mule from a neighbor to get through this difficult time. And, he came to American Fondouk every week to check on Buddy’s progress.

I was amazed that an animal can come so far after such a devastating injury. We all were. After treating all of Buddy’s injuries, we were able to fulfill our promise of sending this brave young mule home.